A student organization in the University of Florida College of Pharmacy proved to be best in the nation by winning the 2017 APhA-ASP Chapter of the Year award. The honor is given annually to the chapter of the American Pharmacists Association Academy of Student Pharmacists, or APhA-ASP, that excels in areas including patient care projects, legislative advocacy, standards of leadership and advancing the pharmacy profession amongst its members. This marks the first time that UF has won the APhA-ASP Chapter of the Year award. 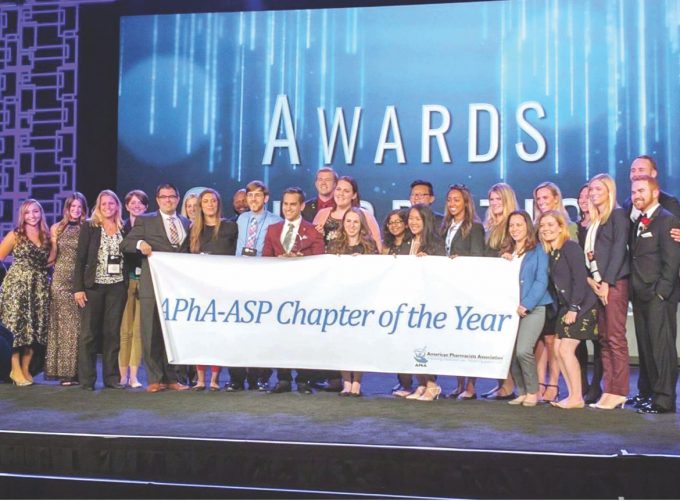 The UF College of Pharmacy’s APhA-ASP chapter, comprised of 600 members, was recognized as the Chapter of the Year.

“All of us at the University of Florida College of Pharmacy are extremely proud of the student pharmacists and faculty advisors who have demonstrated excellence by winning the APhA-ASP Chapter of the Year award,” said Julie Johnson, Pharm.D., dean and distinguished professor of the UF College of Pharmacy. “Our student organizations make significant contributions to our local communities every year, through health screenings, medication education events and other activities. This honor is a tremendous recognition for all the ways that Gator student pharmacists are making a difference in the world.”

The UF chapter, which is comprised of nearly 600 students at the four College of Pharmacy campuses in Gainesville, Jacksonville, Orlando and St. Petersburg, competed alongside more than 125 other APhA-ASP chapters for the nation’s top honor. Throughout the year, UF student pharmacists connect with patients and their communities in many ways through projects within APhA-ASP. From visiting local schools to promote safe medication practices to providing patient care at community health events, UF student pharmacists are improving the health of others by volunteering in these ways. The UF APhA-ASP chapter also devotes significant time to advocating for the pharmacy profession, including more than 40 UF student pharmacists who visited the state capitol in Tallahassee for Pharmacy Legislative Days in March.

In addition to the chapter of the year award, UF APhA-ASP won the Back the PAC Challenge award for the sixth consecutive year. The challenge is a fundraising campaign to support APhA’s political action committee that advocates for the pharmacy profession, and UF raised more than $6,000 this year.