Jerrund Wilkerson stood out on the University of Florida campus when he enrolled as a pharmacy student in 1971. The university had desegregated just 13 years earlier, and there was only one Black student to every 58 white students.

When Wilkerson, B.S.Pharm., M.B.A., now a health care leadership coach, author and consultant, reminisces about his days at the UF College of Pharmacy, he chooses to remember the faces of those who built him up: Dean Kenneth F. Finger, Ph.D., who always lent him a smile, Dean Michael Schwartz, Ph.D., who taught him to develop grit and Assistant Dean Charles Becker, Ph.D., who showed him mercy by allowing him to petition for re-entry when his GPA fell below a 2.0.

Though he also had less-agreeable acquaintances, Wilkerson’s sanguine demeanor doesn’t allow him to linger on them for long. He characterizes the 1970s as a time when there was acceptance of Black students, but the responsibility to assimilate was on them. “When I came along, I didn’t feel any racial tension. I may have been ignored, but accepted,” he said.

Wilkerson assimilated quite well, in no small part, thanks to his bands, Dakota and Styrofoam Soul. A love for music brought together friends of all races, but it also brought Wilkerson academic woes. The aforementioned GPA drop occurred as a result of him “chasing two rabbits and losing them both.” He decided to forego his dream of being a professional musician and focused his efforts on his studies and earning the required 2,080 hours of on-the-job pharmacy experience. But assimilation, in regard to earning those hours, proved more difficult.

“When I was looking for an internship in 1974, not a lot of people looked like me,” he said. “As a Black pharmacy student, I was like a unicorn.” Wilkerson found work at Gary Sotherby and Gresham Pharmacy associated with Alachua General Hospital, but it wasn’t enough to fulfill his requirement. His peers had the upper hand when it came to scoring the most coveted internships; they had friends and relatives who worked in the industry or who could give recommendations, whereas Wilkerson had no such luxury. Not to be deterred, he found his own way — 27 miles south of campus at the Lowell Correctional Institution. While interning at a prison was not his top choice, Wilkerson had to fulfill the requirement because his father banned the words, “I can’t,” and Dean Schwartz taught him to be resilient and exercise grit. Wilkerson did fulfill the requirement and graduated with his B.S.Pharm. in 1975.

“Acceptance without inclusion is half-baked,” he said. “Faculty shouldn’t assume that every student comes to the table with the same background and contacts.” Wilkerson wants to create a level of equity so that everybody has access. “What you do, once you have the access, is up to you.”

As the only Black individual in her four-person, team-based learning group, she fought feelings of inadequacy when comparing herself to her teammates. “I always felt as if they knew double the information that I did and performed better than me. I thought I would never match their level,” Lafrance said. “I would have to remind myself that we are all in the same program. Professors teach us the same skill sets, and we get the same material and knowledge equally. I kept reassuring myself: ‘I can do this, I can do this, I can do this.’”

The first semester in the COVID-era felt extra isolating, but in 2021, she was invited to take part in a photo shoot for Black History Month. Students from the Jacksonville and Orlando campuses traveled to Gainesville, and for the first time, Lafrance got to meet her Black classmates from the other campuses. “There are more of us than I ever expected!” she said. “I got to speak with upperclassmen, and they offered me words of encouragement.”

Black students from the Jacksonville, Orlando and Gainesville campuses traveled to Gainesville this spring for a Black History Month photo shoot. The number of underrepresented minorities in the college continues to grow, as UF now has the highest percentage (34%) of underrepresented minority Pharm.D. students among the Top 40 pharmacy colleges ranked by U.S. News & World Report.

While underrepresented minority students may face challenges integrating with their peers, the UF College of Pharmacy has made great strides in recent years diversifying the student body and breaking down barriers that have previously prevented these students from applying and enrolling in the college. In 2021, the UF College of Pharmacy has the highest percentage (34%) of underrepresented minority Pharm.D. students among the Top 40 pharmacy colleges ranked by U.S. News & World Report and the highest among the health professions colleges at UF. The college no longer requires applicants take the PCAT and GRE standardized admissions tests for admission, eliminating an obstacle to higher education that many underrepresented minority students faced. In addition, several new enrichment programs at UF and UF Health are helping minority students strengthen their academic proficiency and better prepare for a successful application and matriculation into a health professions school.

Lafrance’s determination to get into pharmacy school dates back to her childhood. She suffered from various allergies, had asthma and took many medications. These conditions piqued her interest in pharmacy. Many years later, as an undergraduate at UF, she participated in one of those enrichment programs, the Summer Health Professions Education Program, or SHPEP, which solidified her interest.

SHPEP is a six-week immersive experience that exposes underrepresented minorities to the breadth of opportunities in the health professions. The Robert Wood Johnson Foundation started SHPEP in 1989 to combat the decline of medical school applicants from students of diverse racial and ethnic backgrounds. UF’s program is one of 12 SHPEP sites throughout the nation.

Lafrance participated in SHPEP as a sophomore at UF. The program featured large-scale disaster drills, CPR demonstrations and introductions to careers that the six UF Health colleges can offer. The program helps some students change their projected paths to a different health discipline, while others come to find health isn’t their passion at all. But after mock compounding drugs and visiting a Black-owned pharmacy in Gainesville, Lafrance became further convinced she was on the right path to becoming the first pharmacist in her family.

Though Lafrance was the only member of her SHPEP cohort to begin pharmacy school in 2020, another colleague will be joining her in 2021 — Annie Alexis. SHPEP convinced Alexis, like Lafrance, that pharmacy was the way to go, and she’s taken advantage of every opportunity to study the field before her classes start in the fall.

SHPEP taught her how to write a personal statement, which she used when she applied to the pharmacy program. Richard Segal, R.Ph., Ph.D., M.S., a professor of pharmaceutical outcomes and policy in the UF College of Pharmacy and a SHPEP facilitator, mock-interviewed Alexis and gave her advice on her application.

During SHPEP, she learned she could volunteer at any number of departments at UF Health Shands Hospital. She’s spent many hours there volunteering alongside pharmacists and pharmacy technicians, helping them sort, repackage and label medications.

SHPEP facilitators mentioned that undergraduates could gain research experience through any one of the health colleges. So, Alexis cold-called Takato Hiranita, Ph.D., a research assistant professor of pharmacodynamics in the UF College of Pharmacy, and began working in his lab.

Alexis’ road to the UF College of Pharmacy has included mentorship and support along the way. She is a member of the Pharmacy Early Assurance Program, or PEAP, which is a program designed to assist students through the early process of becoming a pharmacist by providing workshops, training and opportunities related to pharmacy careers. In addition, she is a Machen Florida Opportunity Scholar, which is designed for first-generation college students. These opportunities are examples of expanding equitable access to the College of Pharmacy for deserving students who may have otherwise not been provided an opportunity to shine.

Alexis excels in so many areas, and if she identifies an opportunity, she pursues it. But that’s not to say she hasn’t faced her share of trials. “I have to pick and choose my battles — I cannot carry the emotional load of someone who is spiteful against me because of their internal issues. All that does is prevent me from succeeding and being content in my own life,” she said. “I’m pursuing a career in health care, and I’ll inevitably have patients who may not like me for a variety of reasons — sadly things I cannot control — but I’m not going to allow them to ruin my day, character, nor professionalism.”

Where we want to be

Alexis and Lafrance have had their unique difficulties in assimilating at the university, but their experiences encourage Wilkerson that intentional inclusion is increasing. “The fact that the UF College of Pharmacy has a dean of diversity and inclusion indicates that things are moving in the right direction,” he said.

Allen aims to create an environment that values and demonstrates a commitment to diversity, inclusion and health equity through teaching, scholarship and the broad engagement of students, faculty and staff. He also oversees the diversity and inclusion goals outlined in the college’s strategic plan and serves as the liaison with similar offices in UF Health’s academic colleges and at the university. His plan is expected to create and sustain a vibrant learning and working environment that is welcoming and supportive of all and strives to eradicate equity gaps in student participation and achievement.

In his role as associate dean, Allen draws on his personal and professional experiences to create an inclusive culture, while also opening the college to further understanding and growth. “It’s important that we establish a sense of belonging for everyone associated with the UF College of Pharmacy,” Allen said. “I’m committed to learning about experiences outside my own to better understand and further develop an inclusive environment for everyone.”

Honoring and building upon the work already undertaken within the college, Allen has identified multiple priorities to accomplish in the new role. Among them are the recruitment and retention of a culturally diverse student body, as well as faculty and staff. He also wants to develop culturally intelligent pharmacy professionals by establishing training programs to help Pharm.D. students better understand social determinants of health and pursue a research program to investigate health inequities. He is working collaboratively across UF and UF Health to expand and extend the values of diversity, inclusion and health equity through teaching, research and the delivery of patient care.

Powering the UF College of Pharmacy toward the future of health care.
By Matt Splett 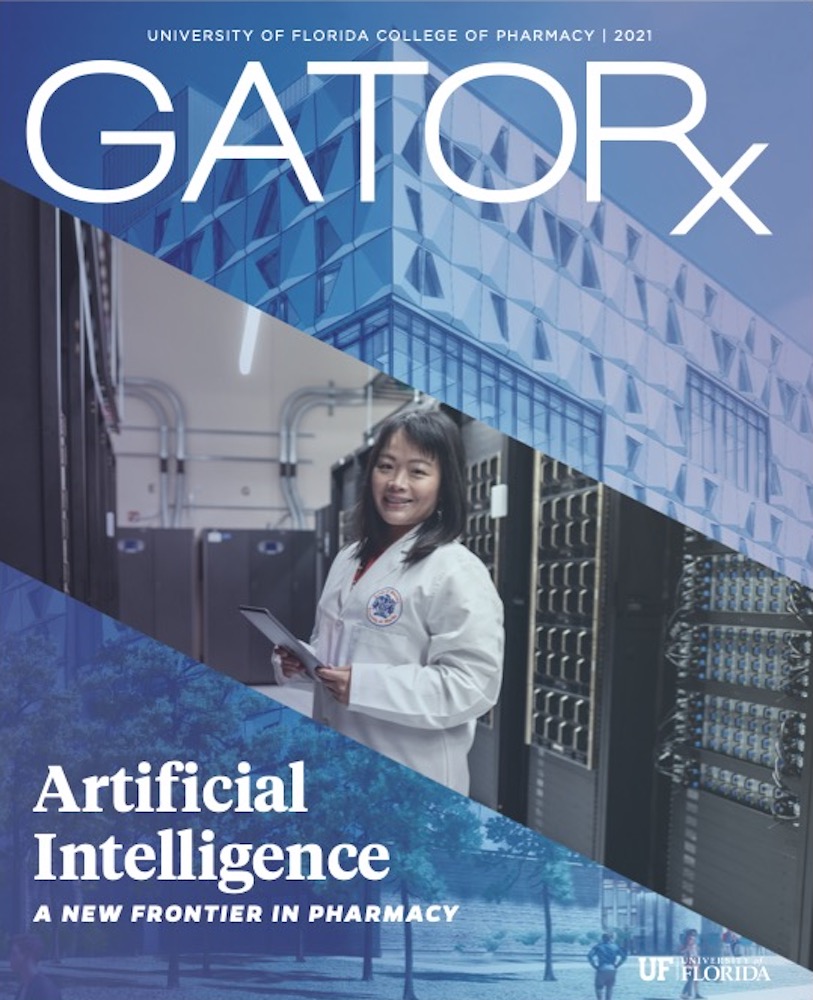